America snoops on the world

“It doesn’t mean they’re listening to every call. It means they’re storing every call and have the capacity to listen to them at any time.” ~Glenn Greenwald (The Guardian)

Fresh details about Prism have emerged after the Washington Post published four more leaked slides detailing the US internet surveillance programme. The paper says the documents indicate the FBI has installed equipment on the property of certain US-based tech firms and passes on retrieved data to the CIA and National Security Agency (NSA). It says in some cases the NSA may be provided with live notifications about a target’s activity in “real time”. Critics have raised privacy concerns. “Prism is the most egregious example of NSA overreach that we’ve seen in the last 10 years or so,” Eric King, head of research at London-based campaign group Privacy International, told the BBC.

“The fact that this material is being shared with the Brits at GCHQ raises serious concerns about the legal regime that is in place for processing the information”. The leaked presentation has named the sources of the data as Microsoft and its Skype division; Google and its YouTube division; Yahoo; Facebook, AOL, Apple and PalTalk. According to the Washington Post, the NSA may gain access to users’ “emails, attachments, address books, calendars, files stored in the cloud, text or audio or video chats and ‘metadata’ that identify the locations, devices used and other information about a target”.

In addition to stored data, the paper says the FBI can also pass on details of targets’ live activities to allow “real-time surveillance” of their use of at least some of the tech firms’ services.

One week ago I left Hong Kong after it became clear that my freedom and safety were under threat for revealing the truth. My continued liberty has been owed to the efforts of friends new and old, family, and others who I have never met and probably never will. I trusted them with my life and they returned that trust with a faith in me for which I will always be thankful.

On Thursday, President Obama declared before the world that he would not permit any diplomatic “wheeling and dealing” over my case. Yet now it is being reported that after promising not to do so, the President ordered his Vice President to pressure the leaders of nations from which I have requested protection to deny my asylum petitions.

This kind of deception from a world leader is not justice, and neither is the extralegal penalty of exile. These are the old, bad tools of political aggression. Their purpose is to frighten, not me, but those who would come after me.

For decades the United States of America have been one of the strongest defenders of the human right to seek asylum. Sadly, this right, laid out and voted for by the U.S. in Article 14 of the Universal Declaration of Human Rights, is now being rejected by the current government of my country. The Obama administration has now adopted the strategy of using citizenship as a weapon. Although I am convicted of nothing, it has unilaterally revoked my passport, leaving me a stateless person. Without any judicial order, the administration now seeks to stop me exercising a basic right. A right that belongs to everybody. The right to seek asylum.

I am unbowed in my convictions and impressed at the efforts taken by so many.

The Washington Post has released four previously unpublished slides from the NSA’s PowerPoint presentation on Prism, the top-secret programme that collects data on foreign surveillance targets from the systems of nine participating internet companies. The newly published top-secret documents, which the newspaper has released with some redactions, give further details of how Prism interfaces with the nine companies, which include such giants as Google, Microsoft and Apple. According to annotations to the slides by the Washington Post, the new material shows how the FBI “deploys government equipment on private company property to retrieve matching information from a participating company, such as Microsoft or Yahoo and pass it without further review to the NSA”.

The new slides underline the scale of the Prism operation, recording that on 5 April there were 117,675 active surveillance targets in the programme’s database. They also explain Prism’s ability to gather real-time information on live voice, text, email or internet chat services, as well as to analyse stored data. The 41-slide PowerPoint was leaked by the former NSA contractor Edward Snowden to the Guardian and Washington Post, with both news organizations publishing a selection of the slides on 6 June.

The revelation of a top-secret programme to data-mine digital information obtained with the co-operation of the nine companies added to a storm of controversy surrounding the NSA’s surveillance operations. Several of the participating companies listed on the third new slide released by the Washington Post – Microsoft, Yahoo, Google, Facebook, PalTalk, YouTube, Skype, AOL and Apple – denied at the time of the initial publication that they had agreed to giving the NSA direct access to their systems. Google told the Guardian that it did not “have a back door for the government to access private user data”. 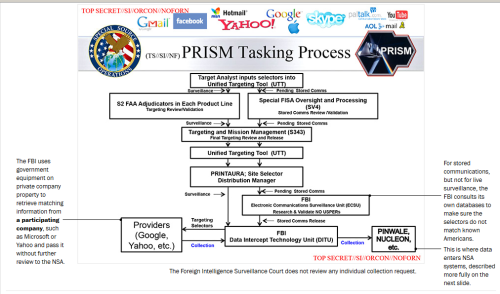 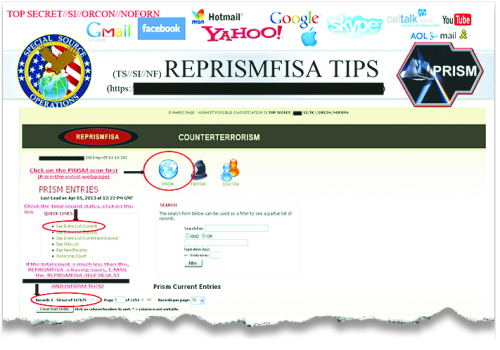 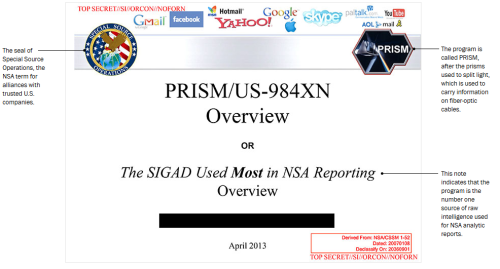 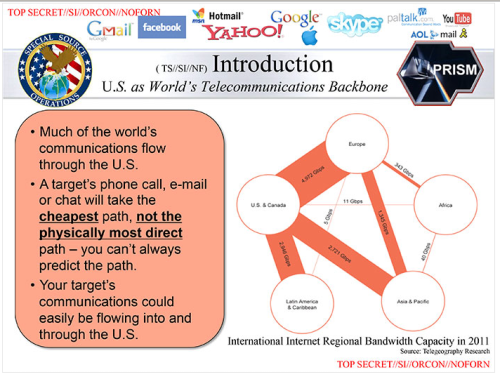 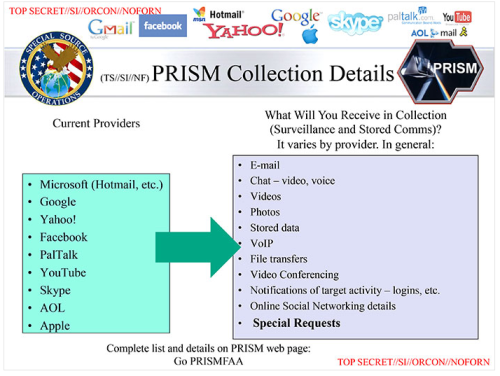 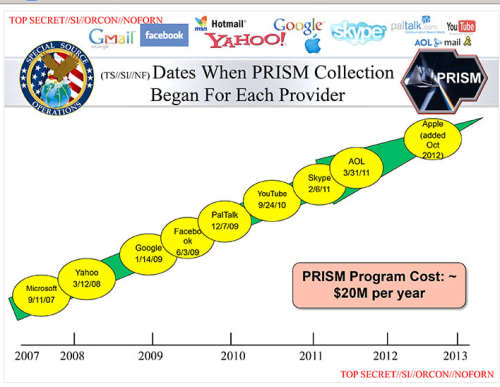 Germany’s Federal Prosecutor’s office said it was preparing to bring charges against British and US intelligence today amid fresh allegations that the services spied far more extensively than thought on German phone and internet traffic and bugged European Union offices in  America. A report alleging a major and continuous US National Security Agency spying operation in Germany was published by Der Spiegel magazine today, prompting outrage from Berlin MPs still reeling from reports about extensive British surveillance in their country. The German Justice Minister, Sabine Leutheusser-Schnarrenburger, demanded an immediate explanation and said the behaviour of the intelligence services was “reminiscent of the actions against enemies during the Cold War”. “It defies belief that our friends in the US see the Europeans as their enemies,” she said.

The leak, which Der Spiegel said came from fugitive ex-CIA analyst Edward Snowden, claimed that the NSA tapped into half a billion German phone calls, emails and SMS messages each month. Reports last week revealed extensive tapping of German phone and internet traffic by British intelligence under its so-called Tempora programme. The information was said to be shared with the NSA. A spokesman for the Federal Prosecutor said the office was preparing to bring charges against “persons unknown” in relation to the reports.

New NSA leaks show how US is bugging its European allies

US intelligence services are spying on the European Union mission in New York and its embassy in Washington, according to the latest top secret US National Security Agency documents leaked by the whistleblower Edward Snowden. One document lists 38 embassies and missions, describing them as “targets”. It details an extraordinary range of spying methods used against each target, from bugs implanted in electronic communications gear to taps into cables to the collection of transmissions with specialised antennae. Along with traditional ideological adversaries and sensitive Middle Eastern countries, the list of targets includes the EU missions and the French, Italian and Greek embassies, as well as a number of other American allies, including Japan, Mexico, South Korea, India and Turkey. The list in the September 2010 document does not mention the UK, Germany or other western European states.

One of the bugging methods mentioned is codenamed Dropmire, which, according to a 2007 document, is “implanted on the Cryptofax at the EU embassy, DC” – an apparent reference to a bug placed in a commercially available encrypted fax machine used at the mission. The NSA documents note the machine is used to send cables back to foreign affairs ministries in European capitals. The documents suggest the aim of the bugging exercise against the EU embassy in central Washington is to gather inside knowledge of policy disagreements on global issues and other rifts between member states.

Transatlantic relations plunged at the weekend as Berlin, Brussels and Paris all demanded that Washington account promptly and fully for new disclosures on the scale of the US National Security Agency’s spying on its European allies. As further details emerged of the huge reach of US electronic snooping on Europe, Berlin accused Washington of treating it like the Soviet Union, “like a cold war enemy”. The European commission called on the US to clarify allegations that the NSA, operating from Nato headquarters a few miles away in Brussels, had infiltrated secure telephone and computer networks at the venue for EU summits in the Belgian capital. The fresh revelations in the Guardian and allegations in the German publication Der Spiegel triggered outrage in Germany and in the European parliament and threatened to overshadow negotiations on an ambitious transatlantic free-trade pact worth hundreds of billions due to open next week.

The reports of NSA snooping on Europe – and on Germany in particular – went well beyond previous revelations of electronic spying said to be focused on identifying suspected terrorists, extremists and organised criminals. Der Spiegel reported that it had seen documents and slides from the NSA whistleblower Edward Snowden indicating that US agencies bugged the offices of the EU in Washington and at the UN in New York. They are also accused of directing an operation from Nato headquarters in Brussels to infiltrate the telephone and email networks at the EU’s Justus Lipsius building in the Belgian capital, the venue for EU summits and home of the European council. Citing documents it said it had “partly seen”, the magazine reported that more than five years ago security officers at the EU had noticed several missed calls apparently targeting the remote maintenance system in the building that were traced to NSA offices within the Nato compound in Brussels.

Glenn Greenwald previewed a yet-to-be-published document about the National Security Agency surveillance program during a speech at the Socialism 2013 Conference in Chicago on Friday night. Speaking via Skype (hence the blurry photo above), Greenwald said the Guardian is planning to publish a document showing that new technology allows the National Security Agency to direct one billion cell phone calls every day into its data repositories. “What we are really talking about here is a globalized system that prevents any form of electronic communication from taking place without its beings stored and monitored by the National Security Agency,” Greenwald told the liberal crowd. “It doesn’t mean they’re listening to every call. It means they’re storing every call and have the capacity to listen to them at any time.”

In his speech, Greenwald excoriated the press for criticizing former contractor Edward Snowden’s decision to leak the NSA documents, saying a climate of fear permeates investigative journalism and cripples the mainstream reporters’ ability to speak truth to power.“In their minds, the only kinds of leaks that are bad are leaks that the government doesn’t want disclosed to the public,” Greenwald said. “The only thing that is journalism to them is when they carry forth the message that has been implanted in their brains by the political officials whom they serve. And I think this behavior highlights the true purpose of establishment journalism more powerfully than anything I or anybody else have ever written.”

His full remarks start around the 10:30 mark: