The UK Foreign Office is “standing by” to help Britons in the French city of Nice, after a lorry crashed into a crowd killing at least 84 people. The lorry driver was shot dead, and President Francois Hollande said the incident was of a “terrorist nature”. Foreign Secretary Boris Johnson said at least one UK national was among those injured in the attack. Downing Street said Prime Minister Theresa May was being kept up to date on “this terrible incident”. A spokesman said Number 10 was “shocked and concerned” by the attack, which happened during Bastille Day celebrations in the capital of the French Riviera. A French flag is being flown above Number 10.

A number of Britons in Nice have described “horrendous” scenes as the lorry ploughed into the crowd. The Foreign Office advised those in the area to contact friends and family to let them know they are safe. The British Embassy has opened a crisis centre with a 24 hour number: 0033 1 4451 3100. British Ambassador to France Julian King said he was on his way to Nice to join a team assisting British nationals. Speaking outside his home, Mr Johnson said one UK national had been confirmed among the injured, but it was “early to say” how many other Britons may be affected. Cabinet ministers would meet later to discuss “the implications for this country if any”, he said. He said his thoughts were with the people of France and Nice, adding the attack was an “appalling incident”. “If this is a terrorist incident as it appears to be, this represents a continuing threat to us and the whole of Europe and we must meet it together.” London Mayor Sadiq Khan said he would be reviewing the English capital’s safety measures in light of the attack.

A truck attack killed 80 people who had gathered to watch Bastille Day fireworks at Nice in France, yesterday. The truck attack was executed by a 31-year-old man of French-Tunisian nationality, who drove a large truck into the gathering, plowing through revelers, many of whom were children. The driver of the truck attack was shot by the police.His truck, according to several media sources, was heavily loaded with arms, including guns and larger weapons.According to a few witnesses, the driver also fired one of these weapons. With the death tolls rising by the minute and over 20 people reported seriously hurt, the truck attack is being viewed as an undeniable act of terrorism, though the terrorist connections of the attacker have not been established yet.

he French President Francois Hollande extended the period of emergency to another three months in the wake of the attack at Nice. The emergency was due to be lifted and had been in effect since the Islamic State’s terror attacks all over Paris in November of last year.

The Telegraphquoted a visibly shaken Hollande from his televised address after the truck attack:

“A fresh atrocity has just been inflicted on France. It is the whole of France which is under threat from Islamic terrorism. We will maintain a high level of vigilance… Human rights are being denied by terrorists, France is clearly their target. The nature of terrorism cannot be denied. The perpetrator has been killed, we do not know whether he had any accomplices.”

Visit source for more on this story
SOURCE = Inquisitr

The Latest: Estonia Reports 2 of Its People Injured in Nice

The Latest on attack that killed 84 people in Nice (all times local):

Estonia’s Foreign Ministry says two Estonian nationals were injured in the Nice attack and it is trying to reach other Estonians believed to be in the area. It did not identify the injured or give further details. Meanwhile, Estonian state-owned airline Nordica says it’s offering passengers with tickets to Nice for July to change their flight plans. Nordica CEO Jaan Tamm says customers who have flown to Nice will be allowed to return on earlier return flights if seats are available. Passengers booked to fly to Nice this month will be allowed to change the time of their departure or change the destination to the Croatian cities of Split or Rijeka, or Odessa in Ukraine until the end of the summer season free of charge. Two Estonian mobile operators said they would allow clients to make free mobile calls from France and receive calls there free of charge for the next two days.

London Mayor Sadiq Khan says London will review its security procedures because of the attack in Nice. The mayor said he wants to reassure all London residents that the Metropolitan Police will do “everything possible” to keep the British capital safe. He said the extremists’ “poisonous and twisted ideology” will be defeated in France, London and other parts of the world. The terror threat in Britain is judged to be “severe,” meaning that an attack is highly likely.

Belgium’s prime minister says next week’s national holiday celebrations will go ahead, but with additional security measures. Charles Michel spoke to journalists following a morning meeting of the Belgian’s government’s Security Council following the lethal truck attack in Nice, France. Michel says Belgian authorities had already considered the possibility of a terrorist using a vehicle to attack a crowd. He says additional “appropriate measures,” which he did not specify, will now be taken to safeguard events scheduled to mark National Day on July 21. OCAM, an independent body that assesses the risk of an extremist attack in Belgium, is maintaining the threat level at 3 on a 4-point scale, Michel said. For the level to be raised to the maximum, he says, there must be “concrete and precise” information about an imminent attack, which he said there was none at present.

German police say they’re stepping up border checks on the French frontier following the attack in Nice. Federal police said Thursday that they had increased checks at land borders and railway crossings with France, and at airports. They would not give further details, but said the move was made in consultation with France.

President Pranab Mukherjee on Friday strongly condemned the terrorist attack in France and said India stands shoulder to shoulder with the French government and its people in fighting terrorism.

“I am shocked to hear about the terrorist attack on an innocent crowd of people gathered to celebrate the Bastille Day in Nice, France,” Mr. Mukherjee said.

Obama condemns “what appears to be a horrific terrorist attack” in Nice, France

“My thoughts and prayers are with the families and loved ones of those lost and wounded. The Department of Justice has reached out to our French counterparts to offer our assistance in the investigation.” Secretary of State John Kerry, who is in Moscow for meetings with Russian leaders, said the U.S. Embassy in Paris “is making every effort to account for the welfare of U.S. citizens in Nice.” He urged Americans visiting Nice to contact friends and family directly. French network BFM TV said the victims were gathered to watch fireworks along the famed Promenade des Anglais on the Nice waterfront Thursday night. Sylvie Toffin, a press officer with the local prefecture, said the truck “hit several people on a long trip” down the sidewalk near Nice’s Palais de la Méditerranee, a building which fronts the beach.

France has been on maximum security alert for most of the past 18 months, hit by multiple terrorist attacks that have left nearly 230 people dead and hundreds injured. President Francois Hollande declared a state of emergency after the assault on Paris last November, the deadliest in France’s modern history. That gives security and legal forces extra rights to conduct investigations and arrest suspects. Hollande said early Friday the order — which was due to end on July 26 — will be extended for another three months after the attack late Thursday in Nice. Prime Minister Manuel Valls has said in parliament that security services have foiled several attacks since January 2015, when two brothers killed 11 journalists in the newsroom of Charlie Hebdo, a satirical newspaper based in Paris. Here is a brief timeline of the recent attacks on France: 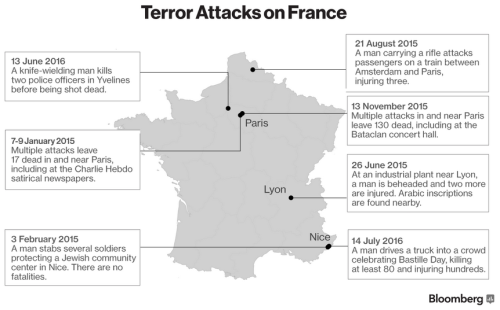 Nice attack: What we know so far after lorry drives into crowd on Bastille Day in France

Dozens are dead after a lorry drove into crowds celebrating France’s national day in Nice. President Francois Hollande has condemned the attack as a “monstrosity” and said the “terrorist character” of the attack is undeniable. “All of France is under the threat of Islamic terrorists,” he said.

Here’s what we know so far:

Boris Johnson: Our thoughts are with people of Nice, France

New Foreign Secretary Boris Johnson says “our thoughts are very much with the people of France and Nice” after this “absolutely appalling incident” which involved a truck driving into a crowd of people during Bastille Day celebrations. Mr Johnson, whose first engagement as Britain’s new foreign secretary was at the French ambassador’s Bastille Day party in London, said on Twitter: “Shocked and saddened by the appalling events in Nice, and the terrible loss of life.” A Downing Street spokesman said: “The Prime Minister is being kept updated on reports coming in from Nice. “We are shocked and concerned by the scenes there. Our thoughts are with all those affected by this terrible incident on what was a day of national celebration.

NICE, France – The driver of the truck that smashed into a crowd of revellers in the French Riviera city of Nice, killing at least 84, has been formally identified, police sources said Friday. He is a 31-year-old Franco-Tunisian man whose identity papers were found in the vehicle after the attack on a crowd that had been enjoying a fireworks display on France’s July 14 national holiday.- AFP