CHARLOTTE — More details are emerging about the man shot and killed by a Charlotte police officer last week. Keith Scott has served time in prison in Texas for assault with a deadly weapon, and just last year, his wife received and later dropped a restraining order against him. Court documents show Keith Scott worked as a security guard at Eastridge Mall in Gastonia, providing for his wife and seven children. He was a family man, his friends say. “You see him, you see his wife. You see him, you see his kids. That’s what I mean about a family man,” said friend Toccaro Harris, who lived across the street from Scott when he lived in Gastonia. Records show briefly last year, Scott’s wife took out a restraining order against him. “He hit my 8 year old in the head a total of three times with is [sic] fist….He kicked me and threaten [sic] to kill us last night with his gun. He said he is a ‘killer’ and we should know that,” she wrote on the form last October.

The complaint asked, “Is there any reason that a law enforcement officer should consider the defendant a potential threat? (i.e., carries concealed weapons while drinking alcohol, has threatened officer, etc.)” She marked “yes” and wrote, “He carries a 9mm black.” The protective order was filed Oct. 5, 2015, and Rakeyia Scott voluntarily dismissed it on Oct. 16, 2015. “It doesn’t mean that he was bad. It doesn’t mean that he had a right to get his life [taken],” Harris said. Scott also had convictions in Gaston County for DWI and assault with a deadly weapon. In Texas, he served more than eight years for aggravated assault with a deadly weapon and evading arrest. His attorney for that case told Time Warner Cable News he shot a man he believed was threatening his family. Scott also has convictions in South Carolina for traffic offenses. At the time of last week’s shooting, his friends and family say he was recovering from a traumatic brain injury and other injuries suffered during an accident. 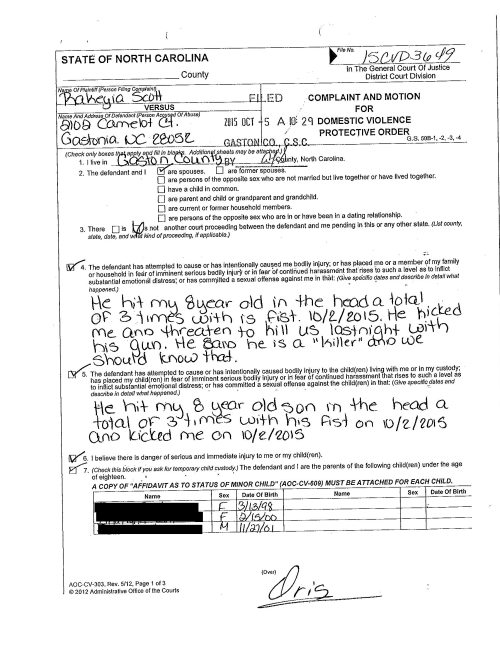 Keith Scott WAS carrying a stolen gun, police say – and his wife filed for a restraining order against him saying he was armed, violent and had threatened to kill her

Keith Scott was carrying a stolen gun when he was shot and killed during a confrontation with police in Charlotte, North Carolina, authorities have said. The gun was reported stolen after a breaking and entering, according to the police. A breaking and entering suspect told agents at the bureau of alcohol, tobacco, firearms and explosives that he had sold the gun to Scott, ABC 11 reported Monday. He is now in custody. Scott’s wife Rakeyia, who filmed her husband’s killing on Tuesday, had filed for a restraining order against him and had told authorities he carried a gun, hit her as well as one of her children and had threatened to kill her, records have shown.

Rakeyia detailed her husband’s behavior in the filing in October last year. She said he had hit her and one of her children. ‘He hit my 8 year old in the head a total of three times with is [sic] fist,’ she wrote on the form published by TWC News. ‘He kicked me and threaten [sic] to kill us last night with his gun. He said he is a “killer” and we should know that.’ The form asked whether there was any reason that law enforcement should consider the defendant a potential threat. Possible reasons included carrying concealed weapons while drinking alcohol and having threatened an officer.

Rakeyia ticked ‘yes’ and specified: ‘He carries a 9mm black.’

A public records search shows that Scott was convicted in April 2004 of a misdemeanor assault with a deadly weapon charge in Mecklenburg County. Other charges stemming from that date were dismissed: felony assault with a deadly weapon with intent to kill, and misdemeanors assault on a child under 12, assault on a female and communicating threats. In April 2015 in Gaston County Court, Scott was found guilty of driving while intoxicated. In 1992, Scott was charged in Charleston County, S.C., with several different crimes on different dates, including carrying a concealed weapon (not a gun), simple assault and contributing to the delinquency of a minor. He pleaded guilty to all charges.

Scott also was charged with aggravated assault in 1992 and assault with intent to kill in 1995. Both charges were reduced, but the disposition of the cases is unclear. According to Bexar County, Texas, records, Scott was sentenced in March 2005 to 15 months in a state jail for evading arrest. In July of that year, records show, he was sentenced to seven years in prison on a conviction of aggravated assault with a deadly weapon. A Texas Department of Criminal Justice spokesman said Scott completed his sentence and was released from prison in 2011.