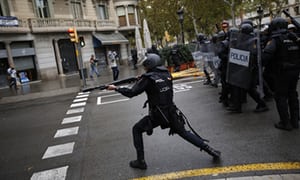 Catalan emergency officials say 761 people have been injured as police used force to try to block voting in Catalonia’s independence referendum. The Spanish government had pledged to stop a poll that was declared illegal by the country’s constitutional court. Police officers prevented some people from voting, and seized ballot papers and boxes at polling stations. In the regional capital Barcelona, police used batons and fired rubber bullets during pro-referendum protests. Speaking soon after the polls closed at 20:00 local time (18:00 GMT), Spanish Prime Minister Mariano Rajoy said Catalans had been fooled into taking part in an illegal vote. 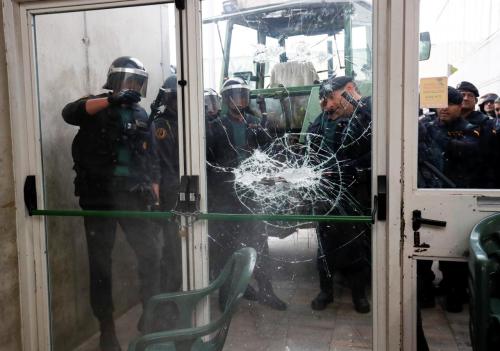 The Spanish interior ministry said 12 police officers had been hurt and three people arrested. It added that 92 polling stations had been closed. The national police and Guardia Civil – a paramilitary force charged with police duties – were sent into Catalonia in large numbers to prevent the vote from taking place. While Barcelona Mayor Ada Colau condemned police actions against what she called the region’s “defenceless” population, Spain’s Deputy Prime Minister Soraya Saenz de Santamaria said police had “acted with professionalism and in a proportionate way”. One voter, Júlia Graell, told the BBC that “police started to kick people, young and old”, adding:

“Today, I have seen the worst actions that a government can do to the people of its own country.”

Spanish police smashed their way into polling stations in Catalonia on Sunday, hitting people with truncheons and firing rubber bullets in an attempt to stop an independence referendum that the country’s constitutional court has ruled illegal. Catalan authorities said more than 760 people were injured when armed national police confiscated ballot boxes across Barcelona and other cities in the region during a day of extreme tension. Spain’s interior ministry said 11 police had been hurt trying to stop the vote. The level of turnout was still unclear on Sunday night, although the regional government claimed that 96 per cent of polling stations had been able to open for at least part of the day. It says it will declare independence within 48 hours of a Yes vote. In much of Catalonia, voting took place peacefully. 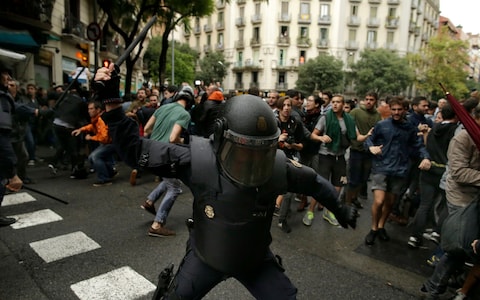 As polls closed at 8pm, Mariano Rajoy, the Spanish prime minister, addressed the nation to say that the rule of law had prevailed and there had been “no self-determination referendum” in Catalonia. He told Catalan officials not to take “new steps that lead nowhere” and called the vote an “attack on the rule of law”, claiming the majority of Catalans did not support independence. “We did what we had to do,” he said. “We are the government of Spain, I am the prime minister and I assume my responsibilities. “There was no referendum. What we have seen was a mere dramatisation.” Shortly after, Socialist leader Pedro Sánchez condemned the violence of the day and called for talks between the two sides. He said that “opening a political negotiation channel” was “more urgent than ever.”

Hundreds injured as Spain cracks down on Catalan referendum

Barcelona, Spain (CNN)Spanish national police launched a widespread crackdown on Catalonia’s disputed independence referendum Sunday, raiding polling stations and firing rubber bullets in a concerted attempt to deny the vote legitimacy. In scenes that reverberated around Spain, riot police smashed their way into some polling locations and beat back voters with batons as they attempted to take part in the referendum. Hundreds of injuries were reported. The mood on the streets of the regional capital, Barcelona, was tense as polls closed Sunday night. Crowds gathered in Plaza Catalonia to await results. Shortly after voting ended, Spain’s Prime Minister said there was no referendum and that most Catalans were fooled into participating in an illegal vote. 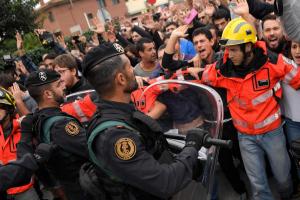 “At this point, I can tell you very clearly: Today a self-determination referendum in Catalonia didn’t happen. We proved today that our state reacts with all its legal means against every provocation,” Prime Minister Mariano Rajoy said in a televised speech. Catalan President Carles Puigdemont condemned “indiscriminate aggression” against peaceful voters. Spanish authorities appeared determined to prevent as many people as possible from casting ballots in the referendum, which Spain’s top court has declared illegal. Catalan spokesman Jordi Turull called the actions of the Spanish state “the shame of Europe.”

Spain’s foreign minister has claimed police violence during Catalonia’s illegal independence vote was “not extraordinary”. Sky’s Europe Correspondent Mark Stone challenged Alfonso Dastis on tactics used by Spanish security forces as Catalan officials claimed 844 people had been injured across the region. Stone said he had seen voters pulled out of polling stations by their hair and stamped on by police, while rubber bullets – illegal in Catalonia – were also used to disperse crowds. Mr Dastis said: “I don’t agree with you that this is an extraordinary level of violence. “You may think people were peacefully exercising their right to vote but the problem is this so-called referendum had been held to be illegal by the constitutional court.”

Barcelona’s mayor Ada Colau claimed hundreds of people had been injured and demanded an end to “police actions against a peaceful defenceless population”. Branding Spain’s prime minister “a coward…hiding behind thousands of police,” she called for Mariano Rajoy to resign or be removed from office. A spokesman for Catalonia’s regional government said millions of votes would be counted and warned the Spanish government was “the shame of Europe” and would be made to answer to the international courts for the violent scenes. In a televised address, Mr Rajoy insisted that no independence referendum had taken place in Catalonia and that those who took part had been “fooled” into participating in an illegal vote.

Here’s a roundup of the reaction to today’s unrest in Catalonia. While some have expressed outrage at the level of violence, others perhaps mindful of separatist movements in their own nations, sounded a note of caution

I don’t want to interfere in the domestic issues of Spain but I absolutely condemn what happened today in Catalonia.

Regardless of views on independence, we should all condemn the scenes being witnessed and call on Spain to change course before someone is seriously hurt.

The referendum is a matter for the Spanish government and people. We want to see Spanish law and the Spanish constitution respected and the rule of law upheld.

Violence can never be the answer! We condemn all forms of violence and reaffirm our call for political dialogue.

Our position is clear and principled, Spain is one of the greatest friends of Serbia.

“[Madrid] is in the same position on the issue of the territorial integrity of Serbia.

Spain is a friendly nation, a proud people. Clearly I hope that civil peace will reign in Spain.

Catalan referendum: Elderly man in tears after voting for independence from ‘dictatorship’

The elderly couple celebrated the “best day in their life” today after casting a vote in the controversial Catalan referendum. The Spanish central government, which has deemed today’s vote illegal and a farce, drafted in riot police from across the country to control order. However, violence quickly escalated when ballot boxes opened this morning, with the Spanish Civil Guard firing rubber bullets at peaceful voters. In spite of the violence, one couple in their eighties told Sky News’ European correspondent Mark Stone that today was one of the most important days in their lives. 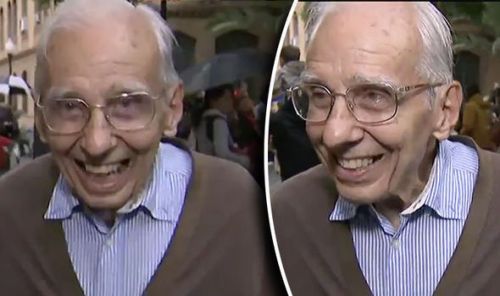 The elderly man, who was accompanied by his grandchildren to the ballot box, came out of the voting booth in tears. He told Sky News that the chance to take part in the democratic exercise across Catalonia today was “a great joy because we have lived for many years in a dictatorship”. Mark Stone later said that this day had been a long time coming for the elderly man, who had dreamed of independence for as long as he could remember.  The man’s grandchild said: “I have no vote, I’m not old enough. But now it’s the time of the old people. They cannot rest any longer. “My grandparents, they lived under Franco. So for them, it means so much, it’s one of the most important days in their life to be involved in this democracy.”Visit source for more on this storySOURCE = The Express

BARCELONA (Reuters) – The Spanish government was reluctantly forced to send in national police to stop a referendum on Catalan independence that had descended into farce, the top Spanish official in the northeastern region said on Sunday. The aim of the National Police and Civil Guard police who descended on polling stations in Catalonia was to seize election materials and they were not targeting people wanting to vote, Enric Millo, the Madrid government’s representative in Catalonia, told a news conference.

“We have been made to do something we didn’t want to do,” he said. Referring to the Catalan government’s announcement on Sunday that people would be allowed to vote at any polling station they found open in the region, Millo said: “It’s all a sham, a farce. It is the first time in history that the rules of the game are changed 45 minutes before the start of voting.”

UN human rights experts have weighed in on the escalating row over Catalonia’s independence referendum, warning the Spanish authorities that their “worrying” efforts to halt Sunday’s poll appear to violate fundamental rights and risk stifling debate “at a critical moment for Spain’s democracy”. The intervention by two specialists working for the UN human rights council comes as senior Catalan politicians urge the EU to step in to address Spain’s worst territorial crisis since its return to democracy four decades ago. Although the referendum has been declared illegal by both the Spanish government and the country’s constitutional court, Catalonia’s pro-independence regional government is pushing ahead with the vote in the face of ever sterner countermeasures from the courts and the police.

In a statement on Thursday, David Kaye and Alfred de Zayas noted the recent arrests of 14 Catalan government officials, the blocking of referendum websites and the possibility that protest organisers could be charged with sedition. “Regardless of the lawfulness of the referendum, the Spanish authorities have a responsibility to respect those rights that are essential to democratic societies,” the experts said. “The measures we are witnessing are worrying because they appear to violate fundamental individual rights, cutting off public information and the possibility of debate at a critical moment for Spain’s democracy.”