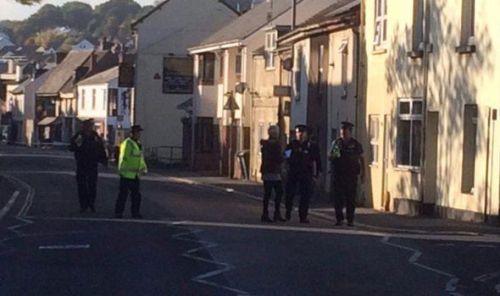 Counter-terror police investigating the discovery of a suspicious item on a Tube train have been granted a warrant to hold a man for further questioning. The 19-year-old was arrested in north London on Friday, a day after the device was blown up in a controlled explosion at North Greenwich station. Westminster magistrates say he can now be detained until 12:20 BST on Friday. Searches are continuing at a house in Newton Abbot, Devon, but police say a device found there was “not viable”. Homes were evacuated and a 200m (650ft) cordon set up after the device was found at the house in Tudor Road earlier. The cordon has since been removed.

The Newton Abbot device was found by officers from the Metropolitan Police’s counter-terrorism command, as they searched the property on Saturday afternoon. After the device was declared non-viable, Devon and Cornwall Police said further forensic searches would continue at the house and a police guard would remain in place. Meanwhile, the Metropolitan Police says security has been stepped up around the transport network in London.

LONDON, Oct 23 — British police were granted a further six days yesterday to question a 19-year-old man arrested after a suspicious item was found on a London Underground train. Counter-terror detectives also found a device they described as “not viable” at an address in southwest England and security was stepped up on the Tube network in a bid to reassure the public. The first item, found Thursday on a train at North Greenwich station, which serves the O2 entertainment complex in southeast London, was still being examined yesterday. A controlled explosion was carried out on the item.

The 19-year-old was arrested by armed police in London on Friday. An electric stun gun was used during the arrest on a busy shopping street, but no shots were fired. The man remains in custody for questioning on suspicion of the commission, preparation and instigation of terrorism acts. Yesterday, a court in London gave police permission to hold the man until 12:20 pm (1820 in Malaysia) on Friday. Detectives have been “working tirelessly since the item was found to follow up all potential leads”, police said in a statement.

A suspicious device discovered by counter-terror police at an address in Devon on Saturday has been declared not viable. Metropolitan police officers investigating a package found at a tube station in London two days earlier had been at a property in Tudor Road, Newton Abbot, when they discovered an item they deemed suspicious. People were moved out of the area but a 200-metre cordon has now been lifted, the Met said. In a statement, they added: “Work has been carried out and it has now been confirmed the device is not viable. Work continues with Devon and Cornwall Police at the scene.” During the evacuation, three pitches at Baker’s Park in the town were cleared.

Phil Smith, 62, who was refereeing a football match, said: “We were eight minutes into the match when suddenly a policeman appeared on the touchline and said, ‘Sorry, you are going to have to stop playing and get out of the park – we want to land some helicopters on the football pitch.’  “He said there was an incident but couldn’t say anything about it. He proceeded to hustle us all off and then he went to the children’s play park and hustled all them out and was trying to get the car park clear as well.” Saturday’s discovery followed a security scare at North Greenwich station close to the O2 complex in south-east London on Thursday. A controlled detonation was carried out on the item, which was reported to have been handed to a tube driver and possibly contained wires and a clock.

A terror plot to target the London Underground has been foiled after police found what they suspect to be a viable bomb on a tube train, planted by a terrorist planning further attacks. A 19-year-old man was tasered and arrested by armed counter-terrorism officers on Friday, a day after the suspect device was found on board a train near the O2 centre. On Friday it emerged that security officials had contacted the Ministry of Defence after the find, to warn serving military personnel, and the threat level for transport in London had been raised to severe to reflect that an attack was highly likely.

In a note the MoD had told personnel: “It remains possible that the perpetrator may attempt to place further devices.” British Transport Police confirmed that they had increased security arrangements because of the discovery and would be stepping up patrols. The discovery of the suspect device and the subsequent arrest came 11 years after the 7/7 bombings when the London transport network was targeted in a terror attack that killed 52 passengers.

A 19-year-old teenager has been arrested under Terrorism Act after a controlled explosion at North Greenwich tube station. The suspect was seized in the street on Friday lunchtime in an armed operation – where police were forced to deploy a Taser but no shots were fired – in Holloway Road, north London. The swoop came after a controlled explosion was carried out on a suspicious item found at the busy London underground station – which services The O2 arena music venue – on Thursday. Unconfirmed reports say that the suspect “item” had passed under “high-level target” London landmarks like Westminster and Canary Wharf on the Jubilee Line before being spotted at North Greenwich.

Reports in the Evening Standard said that a worker found an abandoned bag “full of wires” – and carried it through the train to the driver’s compartment – are also unconfirmed. But ASLEF train driver’s union district organiser Finn Brennan told Mirror Online that the package – believed to be a bag – was initially mistaken for lost property and passed to the driver . He added: “The driver contacted control at North Greenwich as soon as he became suspicious of it”.